Have you ever seen a collection of white bikes around town and wondered what they were? These bikes are part of Pedal Corvallis, your neighborhood bikeshare system.

Pedal Corvallis was launched as a pilot in the summer of 2016 with six stations and a vision to help more people get where they need to go by bike. Initially, there was some hesitation around town about the concept of bikeshare. In a community where so many people already own their bike, who would want to rent one?

As it turns out, many riders have discovered the joys of low-maintenance bicycling through Pedal Corvallis. Over 12,000 trips have been taken since the program launched, and so far this year there has been an average of over 100 rides each week. OSU students in particular have become a core group of Pedal riders, as most rides start or end at one of the campus stations.

Bikeshare gives people the ability to bike even if they are unable to own their own bicycle. Pedal Corvallis is great for anyone who can’t afford a bike, doesn’t have a secure place to store one, or doesn’t want the hassle of bike maintenance. Pedal bikes are also useful for running a quick errand over lunch or for showing friends and family around town when they come to visit.

After three years of heavy use, some of our bikes are starting to show some wear and tear. This summer Corvallis will be getting a brand new fleet of bikeshare bikes, upgraded with some new features for a smoother ride. The new bikes will get here just in time for Open Streets!

Interested in learning more? On the day of Open Streets, you can try out bikeshare with a $6 credit using the code OPENSTREETS19! Join us for the group ride by meeting at one of the designated stations along the bike routes, or swing by our booth at Open Streets. We’ll be showing off the new bikes and Pedal staff will be available to answer all your questions. We hope to see you there!

Twelve years ago, when my husband and I decided to look for our ideal community, we created a “Top 10 Features” list that included bike-friendly streets and a good bus system. We selected Corvallis as our new hometown, drove across the country, sold our car, and joined the growing numbers of Americans choosing to live car-free.

I’m 69 years old. But when I get on my bike and head off to downtown Corvallis or up to Bald Hill, I feel like I’m eight years old again. There’s a sense of freedom that comes with riding a bike, and, thanks to the extensive system of bike lanes and bike paths in Corvallis, it’s easy to get around town. I can go where cars can’t (my favorite route downtown is through the OSU campus and down the elm-lined path between 14th and 11th), and parking is rarely a problem. The cost savings are enormous: by AAA estimates, we’re saving nearly $9,000 annually by not owning a car. 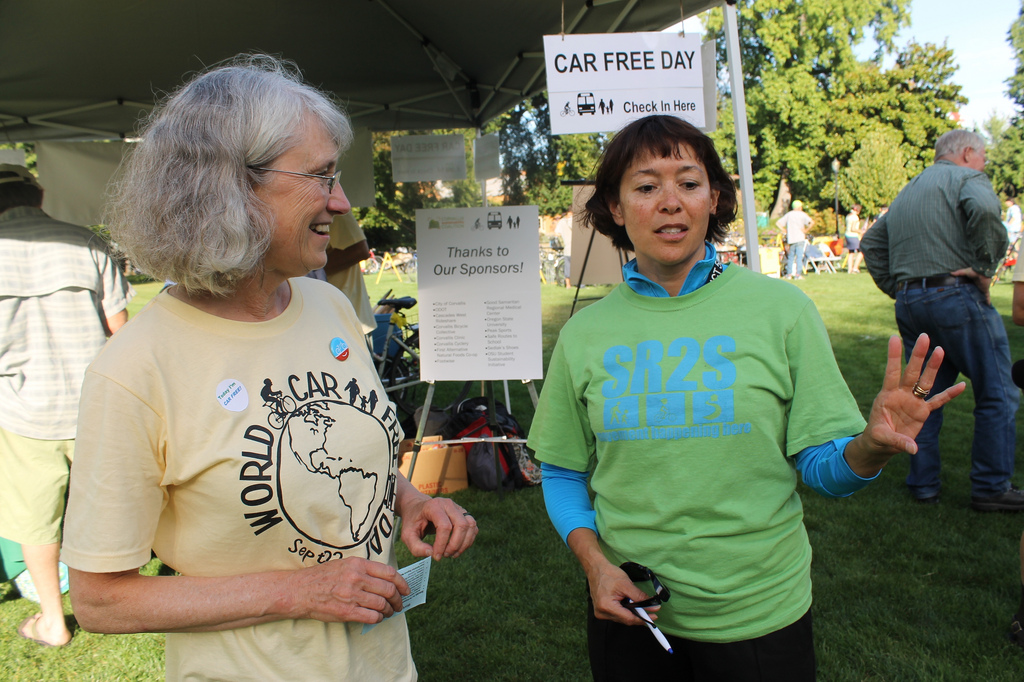 Aerobic exercise is built into my daily routine, and I’m far more connected to both the natural and human environment than I would be in a car – a benefit to both emotional and mental health. If I live to a ripe old age, I envision “graduating” to an ELF, a covered solar and pedal-powered three-wheeler.

When people find out that my bike is my primary mode of transportation, questions generally come up about carrying groceries, riding in the rain, or travelling out of town. My answers are simple:

The ease and safety of traveling by bike are a matter of perspective and practice. I find it’s convenient to put on my helmet, hop on my bike, take the less-travelled side streets of Corvallis, and park my bike close to my destination. In terms of safety, I ride my bike just as I used to drive a car – defensively and by the rules of the road.

Biking, walking, skateboarding, and other forms of active transportation provide all of us a great opportunity to get to know the people and places in our community better. And Open Streets is an AMAZING way to experience the joys of being on our streets without relying on a car.  Music, food, games, and people of all ages engaged in joyful activities are all part of it. I hope to see you there!

Open Streets Corvallis is part of a larger movement that finds its origins in the Ciclovías of Bogotá, Colombia. Since the mid 1970s, each Sunday, from 7 am to 2 pm, some of the Bogotá streets close down to motorcycles, cars, buses, and trucks, and open up to people walking, running, skating and biking, among other forms of non-motorized forms of transportation. A typical Sunday attracts 1.7 million people to these dedicated city streets. Eliza Barclays, writing for VOX, described eloquently the first time she experienced a Ciclovia Sunday in Bogotá:

Last summer, I walked from my hotel down a hill to Carrera Séptima, a wide avenue where men on Italian road bikes zoomed past teenagers on mountain bikes. Grannies on rusted cruisers glided alongside dog walkers. Together, they formed a torrent broken only when a few people periodically peeled off to sip papaya juice from a vendor on the sidewalk. 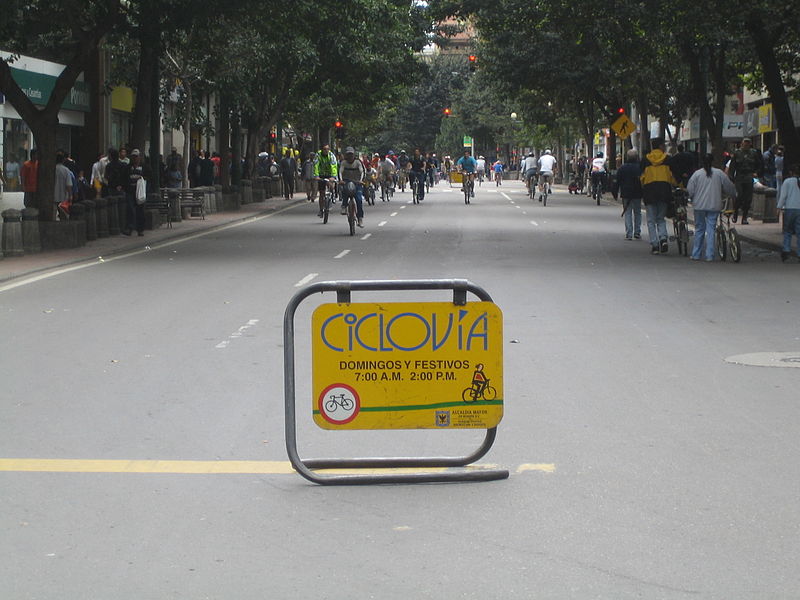 This vivid account coincides with my own experience having been to a Ciclovia Sunday in Bogotá in the early 2000s. Coming from Florida, where in many cases urban planners designed cities for cars and in doing so ignored people and denied the possibility of alternative forms of transportation, I was delighted to see not only people moving by their own means, but also people connecting with each other and building community through simple social interaction. I dreamed of that model for the Florida cities I knew. A few years later, visiting Santiago, Chile, I was surprised to find that the city had implemented the Ciclovía model in the form of their own CicloRecreoVía. On Sundays mornings, 40 kilometers of Santiago’s streets open up to individuals, couples, friends and entire families, strolling down the streets, jogging, biking and exercising in multiple ways. I could see happiness in people´s faces, in streets where during week days there is nothing but cars, buses, noise and smog.

Now Corvallis has joined the movement together with other cities in Oregon, the United States and the world. We are building a consciousness that places the human being at the center of the urban experience. But we are also building a strong community by providing a space, albeit only once a year, for people to express themselves, engage with each other, be physically active and enjoy a happy Sunday. Nothing can be simpler but at the same time nothing can be more valuable than that.

To learn about the Open Streets/Ciclovías movement, visit these online resources:

Ricardo is an applied anthropologist, native of Chile and resident of Corvallis since 2014. He contributes to Open Streets Corvallis through the coordination of the initiative´s research and evaluation component. Ricardo is the CEO of Ethnographica Consulting and has an Instructor appointment with Anthropology at Oregon State University.

If you like to move, there is a little bit of maker in you somewhere. You don’t have to be an expert in physics or engineering to appreciate your body’s effort to power a machine. It’s fun to watch a machine move, but it’s even more fun when you make it move. 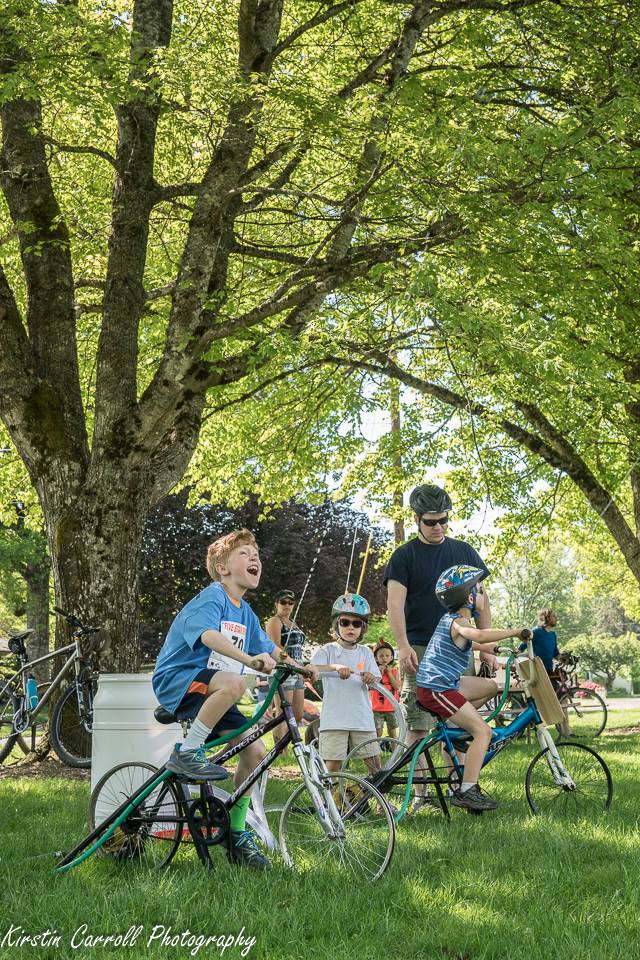 A few years ago, a friend of mine introduced me to Cyclecide; he said he knew a local guy he thought could make something inspired by their designs. As a long-time fan of DaVinci Days – and founder of Corvallis Spring Roll – I was smitten with the idea of something interactive at our kids’ bike event. Enter the bicycle-powered carousel created by Trevor Heald, owner of Marys River Metal Work.

It looks like fun, it feels like fun, it must be fun, yes? Yes. But. Powering something with your own effort teaches you something about yourself and your capabilities, too. Saturday at DaVinci Days, a wide-eyed mother started chatting with me while she and I watched her child power one of the water cannons. “I think he’s going to ride his bike . . . I’ve never seen him move the pedals a full revolution before! He’s figured out he can do it.”

Sometimes fun is a learning experience in disguise.

How did we get from decidedly grounded activities to bicycling in the air? Once Open Streets Corvallis 2017 was on, the fangirl in me needed something adults could ride. Our idea had bicycles on the ground powering a swing in the air. Trevor was otherwise inspired by something he saw at a makers’ fair at OMSI. His instincts are perfect – The Flanger is bicycle-powered hydraulics genius.

In the end, though, Open Streets Corvallis is about more flinging, hanging, and flying by bicycle. It’s about shared experience, acknowledging familiar and unfamiliar faces, intentional public gatherings, and making another kind of effort – to listen and know each other. It’s about building community. From 2017:

“The open street events are so important for community interactions and people getting to meet each other.  Important for us seniors to not get too isolated.”

“I was energized by all the people who turned out, and I also had fun riding my bike along the parade route.  This event showed me that the best way to get an introvert out of her nest is to have an event right across the street.”

Sometimes building community is a learning experience in disguise, too.

I’m interested in resilience. There’s a “social ecology” to resilience – it is strengthened through a person’s physical and social environments. How cool is that? You can improve your capacity to navigate your way to resources that sustain your well-being by strolling around and talking to strangers you meet along the way.

I’m the Creative Director of the Resilience Project, here in Corvallis (not pictured). We are starting a new event called the Summer Games – it’s kind of a scavenger hunt where teams complete events for points (our mayor will present the winning team with gold medals at the end of the Games – how cool is that?). The events are all designed to improve participants’ resilience, and give them opportunities for some silly fun for a week in August.

Look for Pop-up Poetry during Open Streets. The booth will be the intersection of Open Streets and the Summer Games. Summer Games teams will earn points for chatting with an Open Street-er for a minute and then writing them a custom poem in 60 seconds. The poem can be for you, or you can hang out and be a poet for a bit. Or try both! There’s more info at www.wearetheresilienceproject.org/the-summer-games

You should probably start training now for Open Streets. Start by taking a weekly walk around your neighborhood – put on some comfy strolling shoes and stay hydrated for chatting. I’ll see you on August 19th at the Pop-up Poetry booth.